The Pound-to-Dollar exchange rate (GBP/USD) has retreated a third of a percent to 1.3584, following news that Georgia Democrat Jon Ossoff has won his Senate runoff election in the U.S. state of Georgia.

Foreign exchange markets have focused on the runoff vote for the Senate, as the outcome would decide who controls the House of Congress and therefore has far-reaching implications for the U.S. economy and financial markets over coming weeks, months and years.

The Democrats are now tied with the Republicans in the Senate, meaning Vice President Kamala Harris can cast the deciding vote.

The Dollar fell through the midweek session as it became clear the Democrats had done well in Georgia, with the market betting that incoming President Joe Biden would be able to execute a generous economic support package when he steps into the Oval Office later this month. 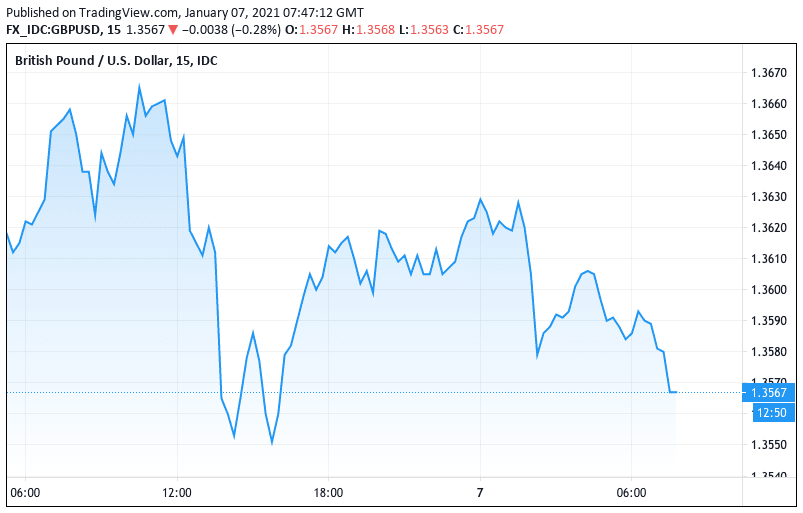 Above: GBP/USD fades back. Get a rate 60 pips away from the market for your overseas money transfer, this can be tightened depending on volume, find out more here.

The foreign exchange playbook has seen the Dollar decline on expectations of a ‘blue wave’ outcome to the November and January votes, as greater fiscal stimulus is held as being positive for ‘risk on’ assets such as stocks.

“The new administration will have the scope to push ahead with a broad package of policies aimed at boosting jobs, investment and green energy. Any tax hikes will probably be delayed until 2022 or 2023, when the economy is expected to be on a stronger footing. All in all, fiscal policy will be more expansionary than under our previous assumption that the Senate would remain under Republican control,” says Olszyna-Marzys.

The Dollar is meanwhile seen to appreciate in ‘risk off’ environments owing to its safe haven qualities and therefore tends to display a negative correlation to rising stock markets.

The obvious takeaway therefore is that political developments in early 2021 are proving to be supportive of an ongoing downtrend in the Dollar.

However, there is a prospect that the Dollar sell-off fades in the short-term now that the vote outcome is known, particularly should investors engage a ‘buy the rumour, sell the fact’ strategy as they so often do when trading political developments.

Furthermore, some foreign exchange analysts are warning that there might have been a tendency to overplay what the Democrat’s win on the Senate means for policy making going forward, saying their razor-thin control of the Senate could be deemed negative for the Dollar short-term, but longer-term could yet prove supportive.

“Even if it turns out to be that both seats go to the Democrats, we doubt that it will be such a landslide change as it would have been on 3 November 2020. First of all, the outcome is too super-tight to give the incoming government a real mandate to apply aggressive socialist (by US standards) policies,” says Christian Gattiker, Head of Research at Julius Baer.

Avery Shenfeld, an analyst at CIBC Capital Markets says that for foreign exchange markets, the impact of the vote is muddy.

“Greater stimulus in the near term might be seen as a boost to risk assets, and these days, ‘risk-on’ trades favour a move out of the greenback. But if the U.S. operates a more stimulative fiscal policy than other countries, it could end up hiking rates first, a move that should support the U.S. Dollar further out,” says Shenfeld.

The analyst describes the win as being more of a “blue ripple” than a “blue wave”.

“In terms of the overall election result, even if the Democrats take both Georgia run-off seats, this was a blue ripple, not a blue wave election. The Democrat’s House majority has narrowed relative to where we were pre-election,” says Shenfeld.

“First impressions on what a 50-50 Senate could easily overplay how much this will matter for economic policy and markets ahead,” adds the analyst.

Shenfeld says that controlling 50 seats in the Senate would hardly give the Democrats “carte-blanche”:

“In countries governed by parliamentary systems, a bill tabled by a cabinet member from a party with majority control will almost certainty get all of its members on board to pass it.

“But not so in the U.S., where although bloc voting along party lines has increased, there are still defectors on final votes, and many more cases where a bill has to be amended by the majority party in order to either bring some of its own members on board, or gain support from the minority party.”

Therefore, the outcome of the vote might be positive for the Pound-Dollar rate short-term, but longer-term it could prove to be a significant headwind.

Invest in Spanish Property. A selection of discounted properties due to the covid-19 crisis, online viewings and transactions possible. Download the Guide