A lot of responses to this thread speak in absolutes, pretending that their prediction is a sure things because its backed by a few lines on a chart.

What we can do is look at the past 5 years that the crypto market has experienced and potentially model what it could look like if we were to experience a similar market cycle.

All established markets work in cycles. 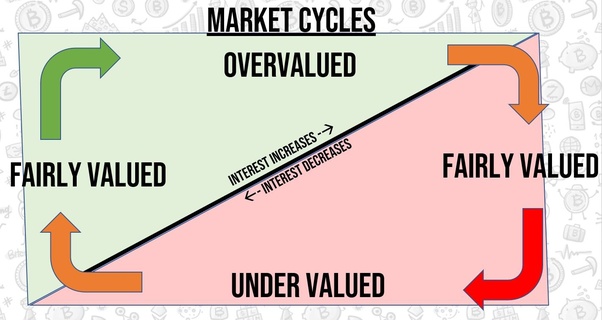 Bitcoin is quite clearly in the undervalued section, and has been through this entire cycle multiple times since it started trading in 2013.

I often get asked “where is Crypto heading in 2019?”… So I thought I’d write a short piece giving my opinion on where the Crypto market is likely heading over the next 12 months.

Of course it’s impossible to predict the future, but there are many indicators that can help guide the general direction of where the market is likely to go… remember, it’s all about probabilities.

Markets work in cycles. They go from undervalued to fairly valued to overvalued then back down to undervalued. The famous saying “the bull climbs the stairs and the bear jumps out the window” is one I often use to describe how this works.

Put simply, when an asset is undervalued, it takes a very long time for it to return to the fairly valued section, and then momentum builds until it is extremely overvalued and then pop, it plummets back down to undervalued again.

We’ve seen this happen time and time again in all markets.

Different markets take different time periods for this sequence to occur, the stock market on average goes through this cycle every 10 years for example.

Lets look at when this happened to Bitcoin in 2014…

The bear market shows the peak around 1,000 USD, where Bitcoin was clearly overvalued and then saw a sharp decline in the price, this is the market being rapidly thrown into the undervalued segment.

This can be noticed by a lot less volatility and volume, almost as if the bears are exhausted. This is often the case when the market seems dead and there’s little interest (relative).

Then the market starts to gain momentum, shifting into the later stages of fairly valued. More people start making money, and they then tell their friends. Think of this point like a snow ball rolling down a mountain, it’s gaining size and momentum. 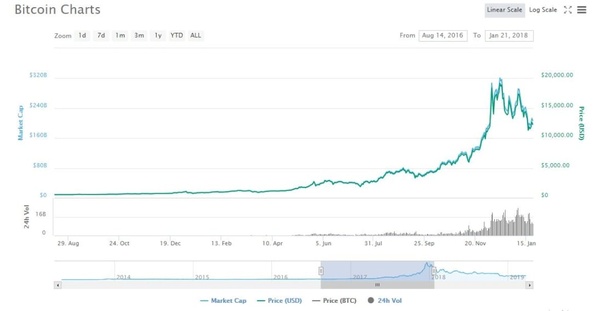 Then you have the overvalued section, this is where everyone is speaking and investing in that asset, you can’t escape the news about it, you’ve made a lot of money on paper and feel as if the market is going to increase forever.

and guess where that leads to…

This is where we are today. We hit overvalued in 2017, and we have now experienced very similar volatility on the way down like in 2014/15. In my opinion (I don’t have a crystal ball) we are shifting from the undervalued stage into the fairly valued stage. In other words, the market has been beaten down to levels where the bears are near enough exhausted and now we should start to see slow, but meaningful growth.

Markets go in cycles, and tend to reach higher peaks each time. I don’t think we’ll see all time highs until at least 2020, however that does not mean we won’t see 10K BTC for example, and altcoin increase by a substantial amount.

The snow ball has been put back on top of the hill, and will start to gain even more momentum than last time.

2) What’s going on behind the scenes

One of the main reasons I created this Newsletter was to keep you informed as to what is going on behind the scenes. I’m not going to dive into great detail about what is being done on a micro level, instead I want to point out one key differential element that we have now that was not present during the last market cycle…

Whether we are talking about ETF’s, Futures, Funds, Circle Invest, User-friendly applications, infrastructure that can support the demand, regulated stable coins, SEC guidelines, laws, gateways, information and community have all exponentially grown over the past few years, and are certainly much more robust and ready for mass adoption than in 2017.

2017’s demand during the end of the year saw many exchanges closing their doors due to the inability to handle such volume. We also saw many people that wanted to invest in cryptos be turned off by the difficulty of such (private keys, wallets etc).

We now have solutions for both of those issues, as well as many more. Both institutional and retail investors will have more ways to get into the market, and the barrier to entry will be pretty much removed.

3) What will a financial crisis do to Crypto

This is a topic that I could speak about for days. I have mentioned before that due to the infancy of the crypto market, it is pretty much impossible to tell how it will perform during a financial crisis.

Bitcoin is widely referred to as “digital gold”. As mentioned before, during times of fear, investors are looking to preserve as much of their capital as possible, and have historically used precious metals to become a store of value.

Many investors are already using Bitcoin as a store of value, despite its volatility. If everyone believes that Bitcoin is a safe haven and a store of value, then during a crisis, it may very well live up to these expectations.

This is one of the most common reasons that people give.

Another reason closely tied to the first is the fear of hyperinflation due to excess printing of fiat capital.

A great example is Venezuela, where their levels of inflation have exceeded 1 million percent (and still rising). Their currency is worthless. Holding onto it will dramatically reduce your net worth in a very short period of time.

Venezuelans do not want to be paid in their national bolívar currency,rather in commodities, dollars or… bitcoin.

Yep, bitcoin. The demand for bitcoin in Venezuela has skyrocketed, increasing month on month despite the cryptocurrency market being in a downtrend.

Can we use this as evidence that during times of fear, people may in fact flock to cryptos? Very possibly.

The second biggest argument that cryptocurrencies will be adopted during a crisis is the fact that, for the first time ever, it presents an alternative to currency that isn’t controlled by the banks/governments.

It’s safe to say fewer and fewer people are trusting banks, especially after the 2008 financial crisis.

If a financial crisis happens, and many people experience significant financial difficulties as a result, they very much may shift to an alternative.

Unfortunately, this is the most likely scenario for quick mass adoption.

People are lazy, and will only act when they absolutely have to. Fear is a very powerful emotion, and gets people to act.

We already have a strong foundation of investors in the cryptocurrency space who strongly dislike banks (to put it nicely), so it is inevitable during a crisis that these investors will be able to easily convert those on the fence into the space and trigger a domino effect and rapidly progress adoption.

So to conclude, Bitcoin is a symbol of hope for many investors, or a symbol of protection against uncertainties. It provides an alternative to currency currencies and may very well be adopted globally as a result of other financial markets crashing.

My personal opinion is that Bitcoin will be much higher within a 5 year time-frame, there’s little point guessing exactly how much but I suspect that we will see all time highs across the board, especially within the altcoin market.

I know that the answer you wanted was probably something like $1,000,000 by 2021, but unfortunately that would be pure speculation and I’d be cautious of those who are overly optimistic / blided by the potential price of BTC.