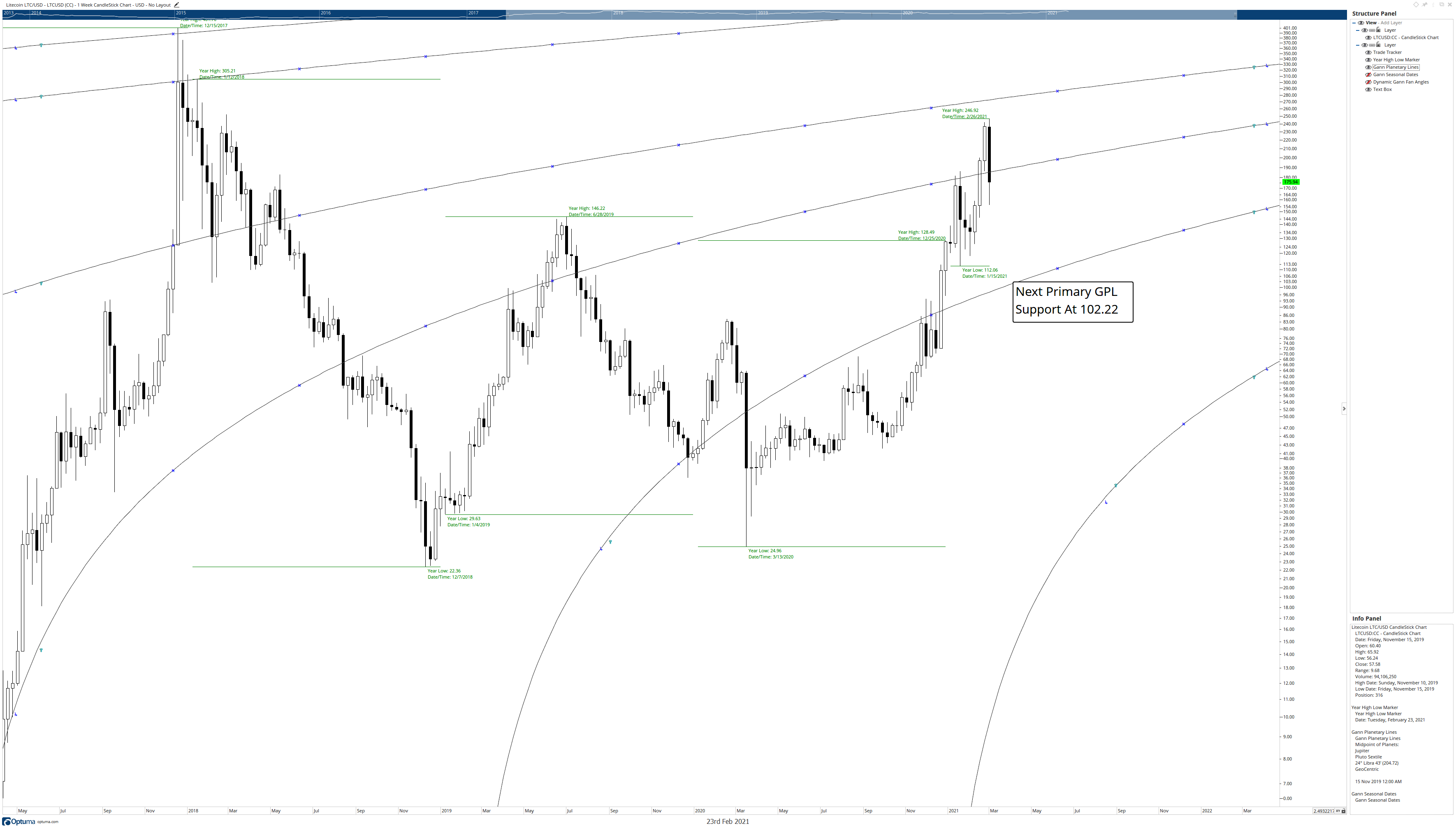 This article will be a detailed analysis of Litecoin utilizing multiple forms of technical analysis. The image above may look a little odd. The odd curve lines on the chart represent a powerful astronomical measurement in technical analysis known as a GPL (Gann Planetary Line). If you’ve never heard of these before, that’s ok. Gann’s methods are a very advanced form of analysis – so advanced that it isn’t even taught at any of the institutions that license technical analysts at the professional level. A GPL is an astronomical measurement of a planet, satellite (moons), or major asteroid. The data provided is pulled directly from NASA and JPL. Gann found that certain planetary lines create the natural support and resistance structures that exist for any chart. For the Litecoin’s chart, the 60-degree divisions between Jupiter and Pluto are what is plotted on the screen. You can see that the recent high was near this GPL while current price action has failed to find support and is now moving lower. The next primary GPL support level for Litecoin is down a bit at 102.22. 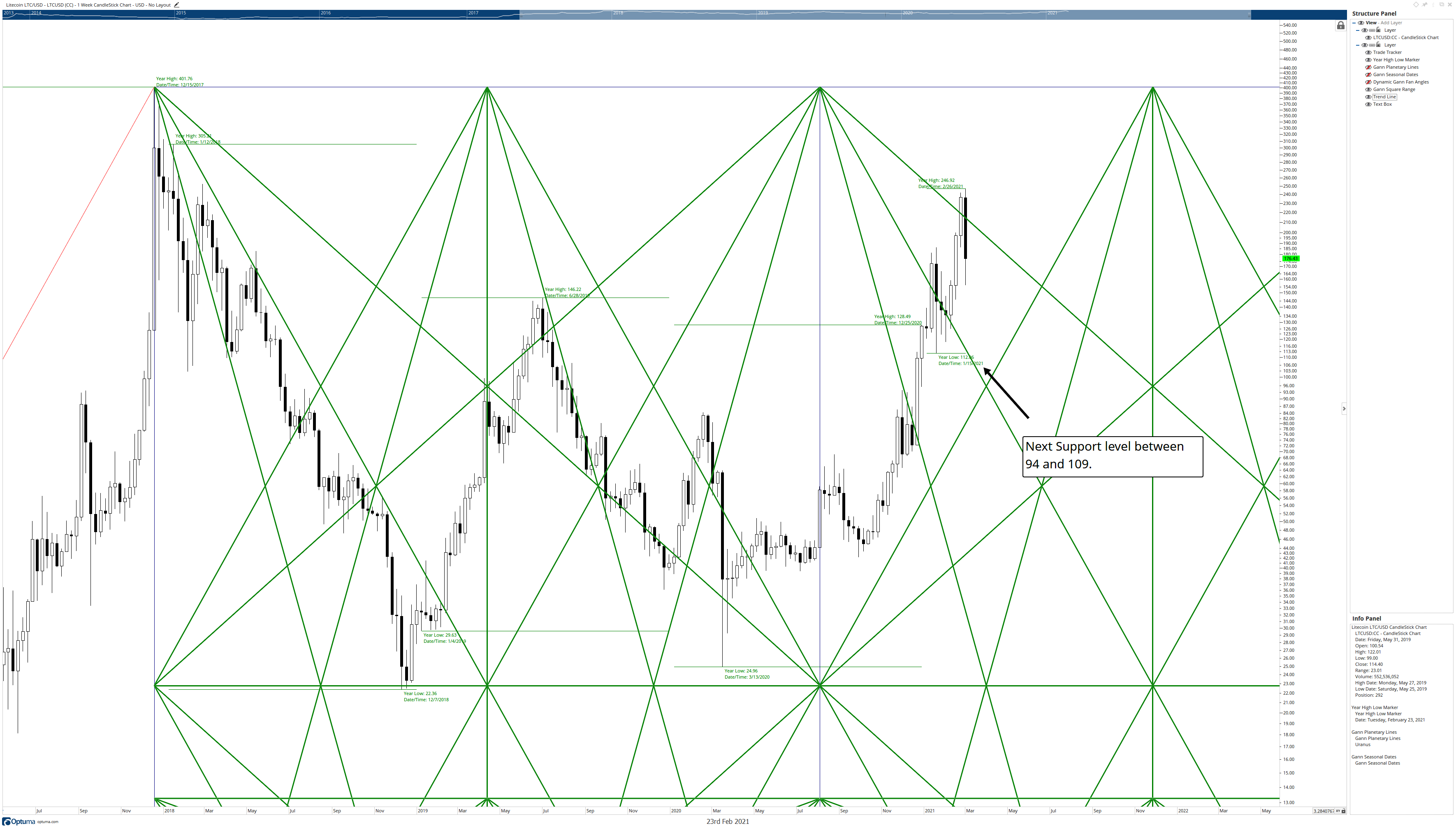 Above: Gann Square of a Range

This next image is Gann’s Square of a Range. There are many tools on many charting platforms that have tools like a Gann Box, Gann Fan, and other Gann titled drawing tools – but almost all of them are made up. The tools look fancy and seem like they work because people force the geometry – but Gann analysis requires a good amount of old school arithmetic and plotting. It isn’t enough to just draw a Gann Box from a swing low to a swing high – that’s not how it works. Anyway – Litecoin’s Square of a Range chart shows that the current weekly candlestick and last week’s candlestick both were halted against a Gann angle in the Square. The expected behavior that we should observe now is for price to travel lower to test the next support angles. For Litecoin, these next support angles are at the price levels between 94 and 109. 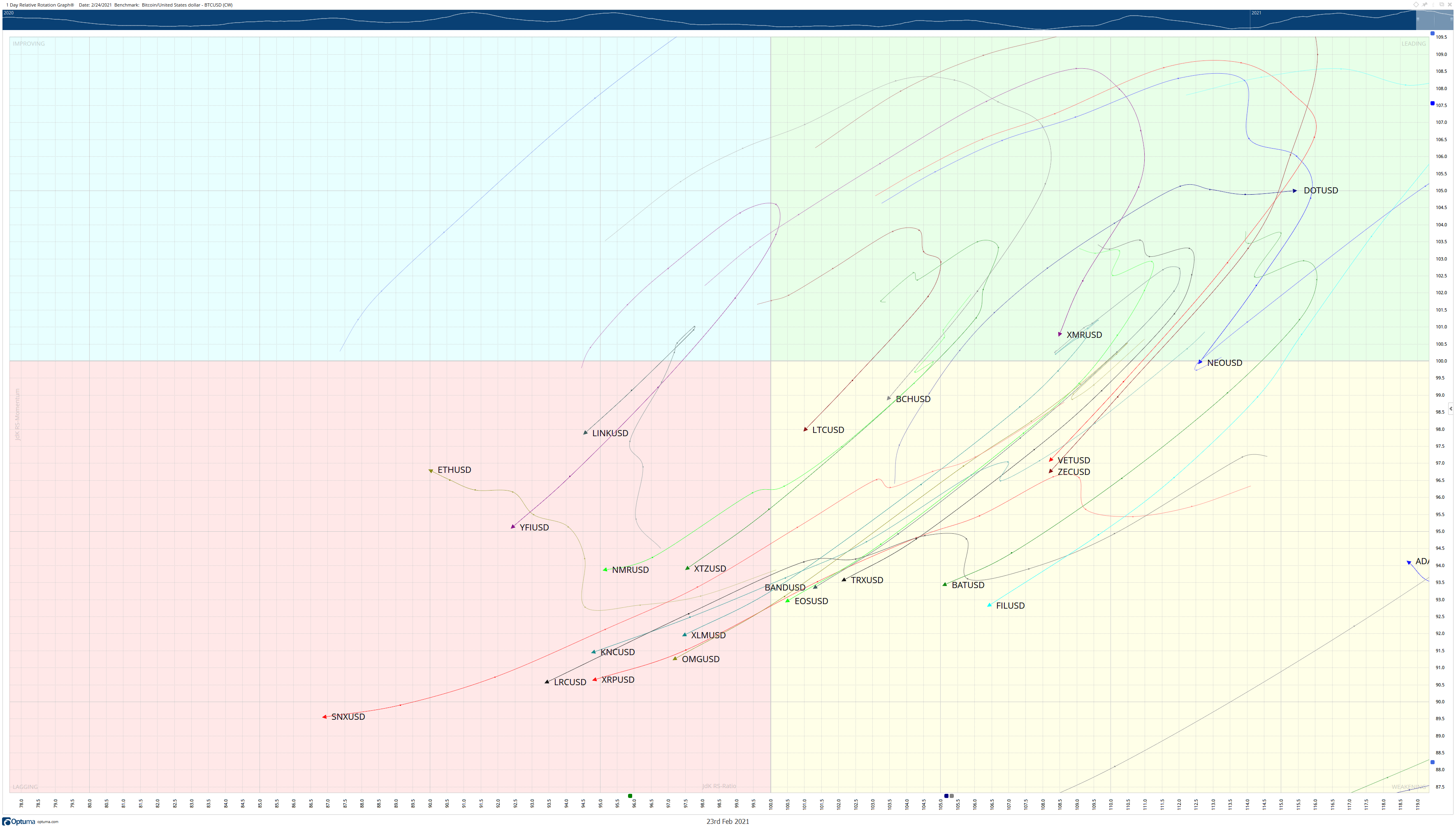 This next image is an RRG (Relative Rotation Graph). Without going into a great amount of detail, know that an RRG chart is a sort of comparison chart to measure various instruments against a primary index or instrument. On this cryptocurrency RRG, the comparison is Bitcoin (BTCUSD). You’ll notice Litecoin is in the near the center, but in the top left hand corner of the yellow quadrant. From this perspective, we can see that because Litecoin is closer to the center (Bitcoin) than other altcoins, it is more closely correlated to Bitcoin’s activity. But we do know that is not always the case – as can be seen by the tail of LTCUSD’s line. We also observe that a large cluster of altcoins like XRP, XTZ, XLM and YFI are all in the red quadrant, indicating major lagging and bearish price action. In other words, they are leading the altcoin market in bearish moves. We can expect Litecoin to follow the rest of the altcoin market. Knowing that Litecoin is still technically outperforming some of its peers, we should anticipate some strong, near term selling pressure.

Save money on your currency transfers with TorFX, voted International Money Transfer Provider of the Year 2016, 2017 and 2018. Their goal is to connect clients with ultra competitive exchange rates and a uniquely dedicated service whether they choose to trade online or over the telephone.
Find out more here.